I'm happy to share that Apress have published my book, Python for the Busy Java Developer! 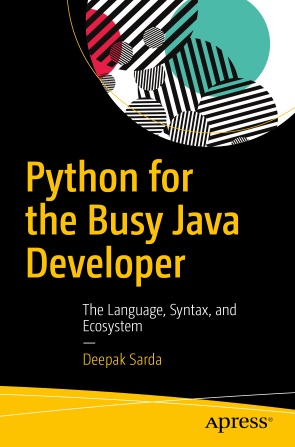 Working with their editorial team, I got the chance to make many improvements and refinements to the version that I had self-published in 2004.

You can find it on Amazon and other places that sell books!

I spent some time yesterday debugging a very curious bug.

One of the apps that my team maintains is a lightweight HTTP proxy written in Java. It acts as a Route Service for apps running in Cloud Foundry.

Today, a user reported that Cross-Origin Request (CORS) functionality in their application stopped working once they inserted this proxy into their request flow. Their analysis showed that the Origin header, which is critical to the CORS flow, wasn't reaching their application. Our proxy was filtering out this Origin header.

This report led to a very interesting debugging session which revealed a rather surprising root cause. Our application uses HttpURLConnection, which is the built-in Java class for making HTTP connections. It turns out that this class keeps a list of restrictedHeaders that it does not allow client code to specify. Here's the list:

If the calling code does set a value for one of these headers, it is either ignored or stripped, depending on the header.

Do you notice anything interesting about this list of headers? That first comment -- Restricted by XMLHttpRequest2 -- gives it away. This is the same list of headers that a web browser restricts application code from specifying!

So why is this Java class enforcing restrictions that originated in the web browser world?

You may remember that not too long ago, Java applets were a big thing. They were the dominant mechanism for delivering rich content inside web browsers, before Flash came along.

So since applets were essentially Java code running inside a web browser, they faced similar security challenges as regular web pages. So it made sense to adopt some of the same security solutions as the browsers did - including restricting the headers that application code can specify!

Was my reasoning correct? Was this change specifically related to applets?

The JDK commit message that introduced this change in 2010 doesn't reveal much:

I could find two CVEs that obliquely reference this issue. Here's the description of CVE-2010-3573:

So there's definitely a connection and this restriction makes sense in the applet execution context.

What is unclear to me is why didn't they enforce this restriction only in an applet context. Why was this made the default?

Can you spot the error in this function?

It makes the rookie mistake of assuming that sleep() is reliable. The call TimeUnit.SECONDS.sleep(1) will certainly put the thread to sleep for a second, that much we can rely upon. The problem is that the sleep can extend to beyond one second; perhaps 2 seconds on an autumn day and perhaps 5 seconds on a full moon night.

Essentially, there are no guarantees that the duration of sleep will be exact or even within a tolerance. This makes the checkTimeOut a lower bound at best and a long lasting siesta at worst.

A recent incident at work was traced in part to a function that, in essence, made the same mistake. It ran fine for eight months in production before failing. Since I was on support during this incident and helped diagnose the root cause, I naturally went back to see who wrote the code and when.

No prizes for guessing who it was ◔̯◔

Last year, Oracle released Java 8, the most significant upgrade to the language since Java 5. One of the headline features in Java 8 is the introduction of the new Streams API.

This blog post is an attempt to wrap my head around this new feature by way of an example.

Consider the Even Fibonacci numbers problem from Project Euler:

A traditional Java solution to this problem would be to create an iterator that generates a sequence of Fibonacci numbers and then iterate through them, adding up the even numbers till we hit an element exceeding four million. Here's an implementation:

This can be made a bit nicer using the enhanced for-each loop syntax from Java 5, which requires that our FibonacciSequence class implement the Iterable interface:

Which brings us to the Java 8 Streams API. Ideally, a stream style API should allow us to solve this problem using something like this:

We start with an infinite stream of fibonacci numbers, consume elements from it till the predicate (i <= 4_000_000) becomes false, filter the elements of the resulting finite stream for even numbers (i % 2 == 0) and finally, compute the sum of the filtered stream.

Unfortunately, the Java 8 stream API has no equivalent of takeWhile. As far as I can tell, the API offers no way of limiting our stream to a finite one. To work around this limitation, we will push the limit into the FibonacciSequence class, making it a finite sequence:

Now we need a way to convert the FibonacciSequence into a stream. The default interface implementation (another Java 8 feature) of the new Collection.stream() method gives us a hint:

The spliterator is the stream equivalent of the iterator. It allows the iterator to be potentially split into multiple iterators so that it can be consumed in parallel via parallel streams. The second parameter, false, provided to StreamSupport.stream() indicates that this stream is not designed for parallel consumption and the returned stream is a sequential stream.

The Java 8 Iterable interface, which our FibonacciSequence implements, now provides a default implementation of spliterator():

So putting these pieces together, we can obtain a finite, sequential Stream of fibonacci numbers using:

With the stream in hand, the only steps that remain are to filter the stream for even numbers and then compute the sum.

Putting it all together:

So that's the stream equivalent of our original iterative solution.

Now we also know that Fibonacci sequences can be generated using recursion. Can we solve the fibonacci problem using a recursive stream generation solution? Turns out, it can be done! Here's how:

I setup a JMH benchmark of these four different implementation strategies and here are the results:

The Stream API does have some overhead over the conventional iterator/iterable based implementations but the clear outlier is the recursive stream implementation which takes 6.6 microseconds to compute the sum which the others can compute in less than half a microsecond!

I've shared the benchmarking code on Bitbucket: https://bitbucket.org/antrix/java8-streams-example. Do let me know if you find a mistake either in my implementation or the benchmark setup.

Switching from Eclipse to IntelliJ? Then perhaps this keyboard shortcuts cheatsheet that I put together will be useful to you. Download, print and start coding!