This is a pasta that I’ve now made thrice with decent results all three times. For folks like me who don’t enjoy cooking but occasionally would like to surprise others, I think this is a dependable one. 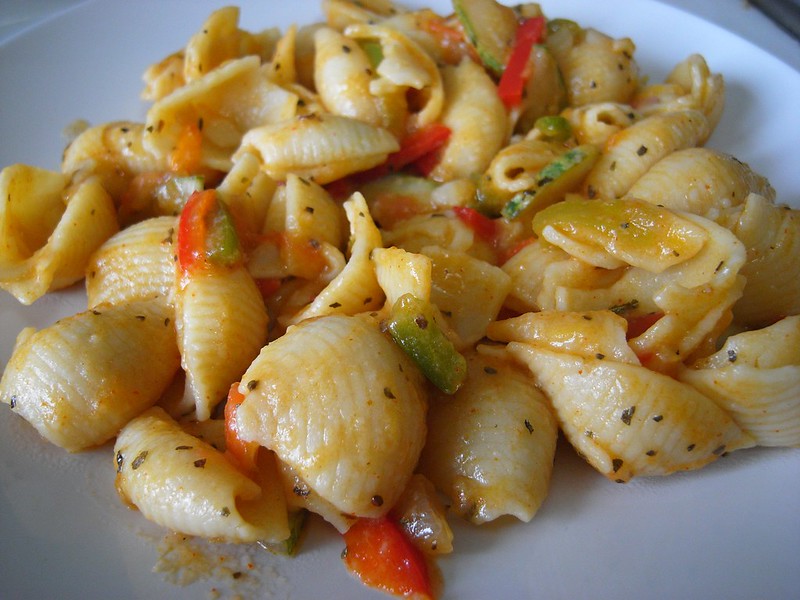 Depending on appetite, this recipe will feed 2 to 3 adults.

Before you begin, ensure you have all of the following handy:

Bring two litres of water to boil and then add the pasta to it. Also add a tablespoon of salt and a tablespoon of oil. Now the idea here is to cook the pasta a little less than fully cooked - al dente as the Italians call it. This is quite tricky to do without the help of a time machine. I suggest you set a timer for eleven minutes when you start boiling the pasta and then check the pasta every thirty seconds after the eleven minute mark. Once you think the pasta is just the right amount of under-cooked, turn off the gas.

While the pasta is being under-cooked, start cutting the veggies. Cut the peppers into thin, one inch long segments. Don’t bother to skin the cucumber - just cut it into thin pie charts with equal quadrants. Chop the onion and tomatoes. Cut the chillies. Mince the garlic. If you are anything like me, by the time you do all this, the pasta would be done. Put the pasta in a strainer and let it, well, strain.

Now it’s time to cook the vegetables. Pour some olive oil in a wok/skillet/pan/whatever you have handy and that can take the volume of the vegetables you’ll soon be adding to the mix. How much oil you ask? Pour as much oil as you imagine healthy low-oil cooking involves. Then pour another 2x that amount. Start heating the oil. This being olive oil, it heats quickly and should be suitably hot in under half a minute.

Add the garlic, chillies and onion to the oil. Cook until the onion turns a light caramel colour. Add the cucumber and the peppers. Stir and cook for a few minutes. Then add the tomatoes and mix it up till the tomatoes are nothing but slurry. Add some salt too. When done, add the pasta which must be all strained by now. More mixing should ensue.

After a couple of minutes of cooking with the pasta - mostly to ensure that the pasta gets hot again - turn off the gas. Add four to five tablespoons of vinegar. Sprinkle copious amounts of basil. One final mix session.

Your pasta is done! If you followed the instructions, it should resemble the photo above. Garnish with grated cheese. Sprinkle chilli flakes if you like your pasta a bit spicy. Serve with garlic bread if handy.