Some time back, I wrote about my tiny little greasemonkey script for gothere.sg - all it does is replace links to SBS Transit with links to my NextBus app. Back then, I also wrote that time permitting, I’d update the script to fetch the bus arrival timings & show them within the bubble itself, instead of triggering a new page load. As you’ve already guessed, I found the time :) 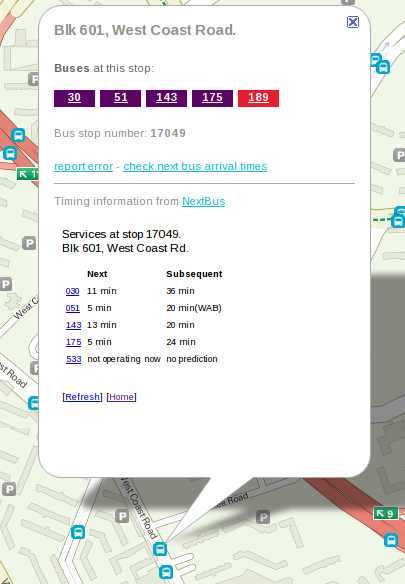 To install/upgrade, just click here: NextBus & gothere.sg. Remember, you must have Greasemonkey already installed in Firefox. If someone feels like packaging the script as a Firefox extension, please do :-)

Finally, a note of thanks to the gothere folks. This update wouldn’t have been possible without some code changes on the gothere site. I wrote to them about it and in just a few hours, Dominic got back saying he had already implemented my request! After that, updating the script took no time. Thanks Dominic!