Welcome to the all new antrix.net! It is clean, fresh and powered by ZPTO!

It has been redone from the ground-up: new thinking, new design and new technology was employed in this reboot.

Please walk around & take a look. If you find something broken or out of place, do let me know.

I started blogging back in 2003 and initially, it wasn’t even on antrix.net. My archives indicate that I was using something called Nucleus in those early days. I can’t even recall what that tool was like!

I don’t think it was more than a couple of months after that that I moved the blog to antrix.net and also to Blosxom, a Perl based blogging tool. I always loved Blosxom’s simplicity but hated that it was in Perl. I also lost a few of the early posts in that migration.

The next change came in December 2004 when I moved to Dreamhost as the site host. Although that move didn’t require moving to yet another blogging tool, I was unhappy even then that I had limited control over the blogging tool that I was using since I didn’t really want to deal with Perl. Here’s what I wrote then:

No doubt this is a curse cast upon me for cursing Perl at every opportunity (presented and created) since we crossed paths a few years ago. Look where that has got me, a broken website which I can’t fix ‘cos I can’t grok the Perl code that powers the damn thing.

Over the years, I tried to work around that discomfort with Perl by creating tools written in Python that augmented the core Blosxom based blog. However, the plan was always to replace the core blog with something that I understood. It took a long time but that plan has been executed now!

The new site is powered by Django with heavily modified versions of some stock and some third-party Django apps. In a future post, I’ll get into the details of that.

Apparently, I’ve written 641 posts - excluding this - in these past eight years. Here’s a breakdown by years: 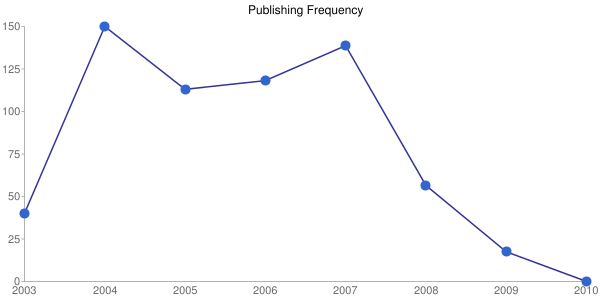 As is obvious, there has been a marked decline in publishing frequency over the years. I’d say there’s a combination of factors that contributed to this decline:

So will the reboot cause an upward trend in the above graph? Only time will tell!